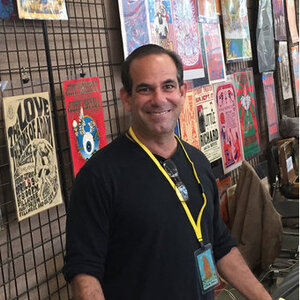 Glen Trosch has been widely lauded for his active role in tirelessly supporting the need for transparency in the vintage rock concert poster market. He is widely credited with breakthrough educational programs that provide collectors with unprecedented information on the topics of grading, storage, and establishing a two-way market for these vintage posters.

How long have you been active in the collectibles market?

I have been a collector of paper since I was 8 or 9 years old, my family owned a periodical distribution business. I had unlimited access to magazines, comic books, and paperback books. I was a kid (literally!) in a candy shop.

I started out collecting Mad magazine, Charles Shultz paperbacks, and funny comic books, then all the superhero stuff. I remember collecting and trading early 70s Topps baseball cards and Wacky Packages when I was 10. I became serious about buying and selling actively, as a teen at local comic shows. I bought a great deal through mail order at that time as well. I was doing all I could to get my hands on any underground comic that I needed.

I became heavily involved with 1960's psychedelic rock concert posters when I was in college. After the family business was sold, I bought a massive inventory of music-related memorabilia, and spent the next few years selling on eBay and at record shows. All along though, my heart was in these posters. I could never stop buying the stuff, and for the past 25 years, I have been immersed in the world of vintage rock concert posters. My home has always been adorned with these beautiful treasures. Creating the Psychedelic Art Exchange is the culmination of my life's collecting passion.

What made you decide to specialize in collectibles from the 1960′s?

Trosch: I've always been a collector, and the Sixties has always been the focus of my collecting passion. As long as I can remember, I've had a fascination with the era. The popular culture images from that time, most notably the counter culture images, which were soon adopted by the mainstream, left a strong impression on me. I think the leftover artifacts from that era are enduring.

I've collected underground comix and concert posters from the Sixties since I was a teenager. When I first traveled to the Bay area in the early Eighties, I realized that this was my bliss. The fact that San Francisco/Berkeley was the central distribution area for this material meant that there were still several places that sold these gems. I'd spend most of my time perusing poster and comix shops. I'd come home with armfuls of poster tubes and stacks of comix.

Are the dealers that you bought from still in business?

There were never that many dealers, to begin with. The leading sellers that I worked with to build my collection are all gone. Few mail-order dealers currently sell posters, but none have an inventory of premium pieces like Psychedelic Art Exchange.

What changes have you seen during the decades that you have been buying and selling vintage rock concert posters?

The most notable change I've witnessed is the increased scarcity of the most popular posters, especially those in top condition. Many posters used to be available for just a few dollars, and with values starting to escalate, higher prices are the norm. However, compared to other more established collectibles, 1960′s psychedelic concert posters still represent an incredible bargain.

With the increased attention that the medium has gotten from mainstream art institutions; this hobby is about to explode. The popularity of this artwork is now widespread, it has grown far beyond just the fans of the music. There is now a constant stream of new collectors entering the market.

What types of people do you see coming into the market now?

Most of the new players are educated professionals that are highly successful in their chosen field. They are sick and tired of seeing their net worth swing up and down weekly. They are very excited to discover affordable high-end art that is ultra-rare and historically important. Every day I get photos from happy clients that are so happy to have a real rarity hanging on their wall for their friends and family to see.

What advice would you give for someone just starting out?

First, buy posters that are only of the very best quality possible. So many of these pieces were displayed with pins, thumbtacks, and tape that it's challenging to find the most desirable posters in top condition.

Third, make sure that you deal with someone you trust that will stand behind what you acquire, both before and after the sale.

There are a lot of professionally restored posters out there. In my opinion, restoration completely ruins the originality and authenticity of a piece. These pieces are nothing but traps, be careful.

Also, only purchase what you love, and what you personally feel good about owning and displaying. Be conscious of your collection as a whole. In other words, what ties your collection together? What makes it distinct? Cohesiveness is so much more compelling than just a random stack of posters.

What are the most common mistakes you see collectors make?

The biggest mistake you can make is not doing your homework. When new folks become exposed to this art for the first time, they become immediately smitten. People are tempted to rush out and buy pieces that had large print runs, settling for posters in poor condition, or accepting restored items.

Buying solely as an investment opportunity is a big mistake as well. Without a sincere interest in these beautiful and historical posters, you will not be successful or have any fun. Savvy collectors will do really well in this market, but if you don't have a passion, you should probably just buy stocks and bonds instead.

What are the common traits you see in the most successful collectors you work with?

The most common trait among all successful collectors is a deep and thorough understanding of what they are collecting. They spend hours researching information relating to their collection. Without a doubt, they have unyielding attention to quality.

These collectors have so much faith and knowledge in this collectibles market that when the right piece comes up for sale, they will do whatever it takes to obtain the poster. Successful collectors recognize that the opportunity to acquire a rarity is almost always rarer than the collectible itself because the good stuff tends to gravitate into powerful hands.

What do you see as the future for the market for vintage rock concert posters?

I see the genre gaining far greater recognition and reverence. What is happening now in this market has taken years to set in motion. Now that these posters are 50 years old, they really have entered the realm of a tried and true collectible.

It took this amount of time to be able to look back at the era and see how powerful and influential those brief few decades were to today's culture. These works of art stand on their own, but they have the added desirability of representing the music and cultural values that millions of people still cherish and embrace.

What are you trying to achieve with Psychedelic Art Exchange?

First and foremost, I see PAE as a vehicle to introduce and educate collectors about these fantastic works of art.

Second, we want to provide a safe and secure way for new collectors to participate in this market confidently. We don't want them to worry about issues such as grading or authenticity.

And lastly, we want to provide a two-way exchange so that collectors can quickly liquidate their collection when the time is right. We execute all of the above with a level of professionalism that is unseen anywhere else.